Skip to content Skip to left sidebar Skip to footer

A little history about the RM and its buildings.

In 1975 the RM built a new shop on the north side of the highway (blue shop).  In 1996, the Provincial Government closed many of their small Highways & Transportation Depots, the one in Oungre being one of many, the Council made an offer to purchase and it was accepted.  This facility is still considered our main shop.  In 2003, the RM Council approached the School Board to propose the possible relocation of the RM office into the “portable additions” of the Lyndale School at Oungre and that was also accepted.  In 2016, the Council decided to build another cold storage building for the equipment and it is located on the north side of the highway beside the “old blue shop”.

Within the RM we have a few unorganized hamlets/villages, we have Bromhead, Hoffer, Oungre, Ratcliffe and the RM and the Village of Tribune amalgamated in 2018.

Bromhead area was first settled in 1902, and an influx of settlers arrived from 1904-1906.  The village was soon incorporated.  Bromhead’s population peaked near the 350 mark.  It was the biggest community on the railway branch line, boasting the necessary shops and amentities.  A disastrous fire in 1916 destroyed a quarter of the town, including the Bromhead newspaper, a three-story hotel, several shops, stores, two livery and feed barns, a restaurant, the village hall, a bowling alley, barbershop and many residences.  A second fire incinerated even more businesses.  Only the butcher shop and pool hall were rebuilt.  Future expansion plans were dealt a blow in 1926, when the Bromhead-Minton branch line was built, which cut into Bromhead’s territory.  The municipality, doctors offices and pharmacist relocated to Oungre.  Other businesses eventually followed suit.  The last business in Bromhead was the hotel, which burned to the ground in March of 1986.

Hoffer, like many other towns like it, on the line from Estevan to Minton was a very important link for the people from 1926 to 1960.  The railroad was very important to move grain, cattle and to receive mail, supplies and people.  After the elevators closed in 1975, business ceased to exist in Hoffer.  Hoffer had a few things to offer people including: the elevators, a synagouge rabbi house, town hall, school/teacherage, lumber yard, and a store.

Oungre The CPR decided to extend the Bromhead-Westerly Branch from Southall to Lake Alma.  The building of this branch took place in 1926 and 1927 and was put into operation in late 1927.  The first business was Oungre Garage built in 1927.  The Canadian Consolidated Elevator was put into operation in the middle of July 1927.  A community hall was built and even had a projection room for movies.  The post office was establish in 1928.  The Sask Pool Elevator was built in 1928.  The first livery stable and dray was opened in 1928.  In 1928 a hotel/restaurant was built.  A store and butcher shop started around 1929.  First blacksmith shop came to Oungre in 1931 and left in 1932.  Co-op came to town in 1932.  In 1940 Kuntz Garage and Implement Agency started.  In 1950 Chapmans General Store opened.  In 1968 the South East Regional Library at Oungre was opened.

Ratcliffe The CPR steel was laid for the railway about mid summer of 1926.  Even before that, someone started a grocery store.  Federal Grain Co build a grain elevator, a cafe was also built to feed the builders and grain haulers.  A post office was built, an office and lumber yard soon followed along with a bigger store, another McIlrath lumber yard, a bigger store was built, an Esso garage and machine shop, a 2nd garage, a hall, a hotel, a school.  By 2005 the grain elevators were gone and the curling rink was gone, all that was left was a hall, two street lights and one residence.

If you are interested in more information on these little towns and the residents of the RM, be sure to purchase a History Book from the RM Office. 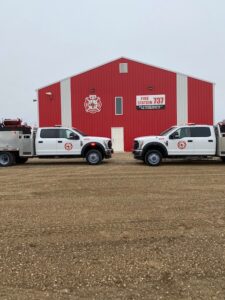 In late 2016 the 737 Fire Board was established.  This led to the formation of the 737 Volunteer Fire Department in late 2017, which set to provide wildland fire fighting services to the residents and ratepayers of the RM of Souris Valley, RM of Lomond and a portion of the RM of Lake Alma.  Since the establishment of the 737 Volunteer Fire Department the Councils of the RM of Souris Valley and the RM of Lomond have worked together to establish a fleet of equipment consisting of 4 fully equipped wildland fire fighting trucks and 2 water tenders. 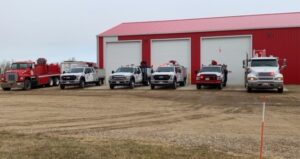 Together we built and outfitted a brand-new fire hall in a central location and have recruited and continue to train around 30 active volunteer fire fighters.  The fire department consists of a local fire chief as well as deputy fire chiefs from each municipality, working along side the volunteers that spread from the south end of the RM of Souris Valley to the north end of the RM of Lomond.  The formation of the fire department has also prompted numerous discussions and meetings for multiple mutual aid agreements with all surrounding municipalities, United States counties and other fire/rescue departments.  Through these actions the 737 Fire Department is able to provide emergency fire and specific rescue services to ratepayers and residents of both municipalities in addition to mutual aid to the neighboring municipalities and counties should the need arise.

Be sure to check out their Facebook page for all the latest updates and upcoming events.

RM of Souris Valley No. 7

There are no events